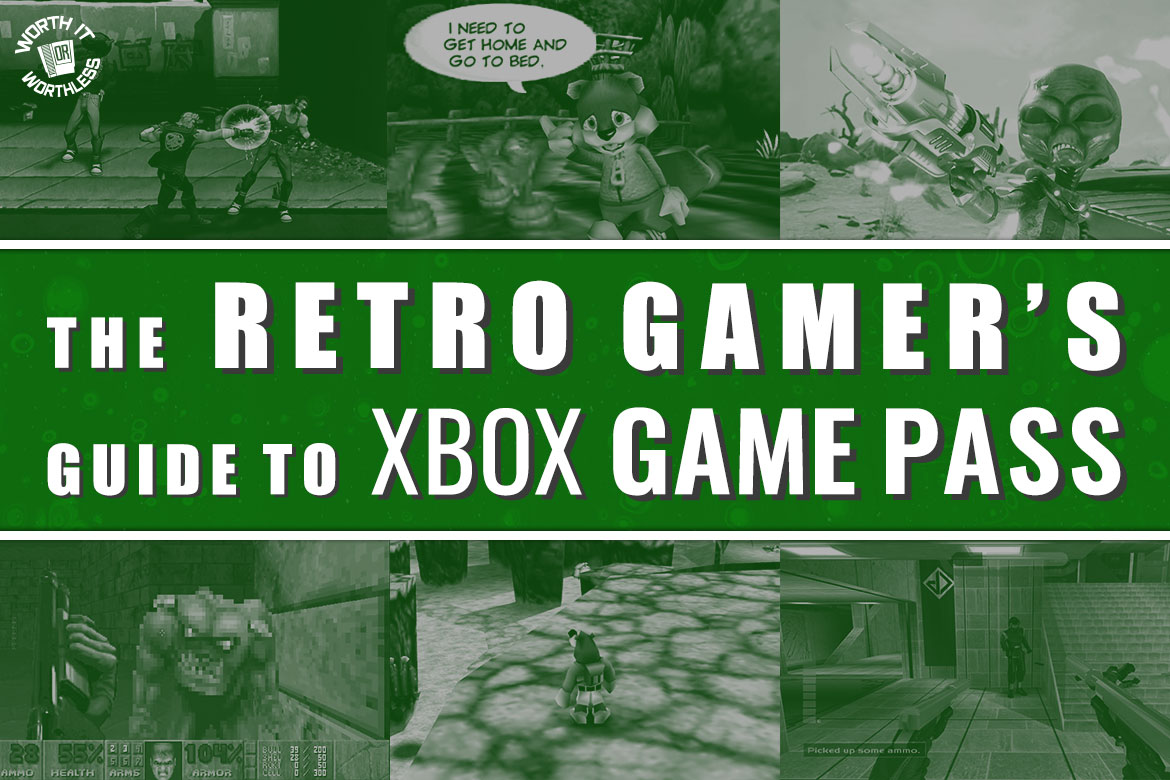 Xbox Game Pass is a fantastic service that’s available to owners of both the Xbox One and the Series S & X. Not only does it offer a lot of AAA titles and indie games, but it also caters surprisingly well to people who enjoy retro games.

I recently decided to take a detailed look at the current offerings and to compile a list of a lot of the retro game available on the console version service. This isn’t an exhaustive list of everything, but it’s a list of both retro games, and updated versions of retro games that might be of interest to Xbox owners.

I was actually a bit surprised at the breadth of the types of games on Game Pass. It really does seem like there’s something to play for every kind of gamer.

I’ve admittedly never played the original PS2/Xbox version of Destroy All Humans!, but after checking out this updated remake for a little bit, it definitely seems like a hilarious game that’s worth playing. It’s supposedly pretty faithful to the original, so if you’re a fan of that, you’ll probably have a good time here.

If you’re unfamiliar with the game, I’d recommend at least giving this one a shot through the first mission.

DOOM is a franchise that I’ve only started to get into recently. If you’ve never had the pleasure, DOOM is a fast-paced shooter that takes you through short levels which are a bit like puzzles. Generally, you’re looking for keys to open locked doors and trying not to get killed by demons along the way. It holds up surprisingly well and I’m beginning to appreciate the status that DOOM has enjoyed over the years.

Game Pass has you covered for most of your franchise needs here with DOOM 1-3, DOOM 64, DOOM (2016), and DOOM Eternal. If you’ve never checked out DOOM, thankfully Game Pass gives you a great way to see what the hype is about.

You can find more info on each game here.

If you like beat-em-ups, Double Dragon Neon is definitely a game that’s worth checking out. I’m a big fan of the genre but there was something about this one that eluded me years ago.

After spending a bit of time digging a little deeper, I found a fun experience with mechanics that are deeper than a lot of games in the genre. There’s an interesting upgrade system that allows you to choose how you want your stat categories to play out as well as choosing your special ability.

The game has a quirky sense of humor as well that you might find endearing (or just cringe-worthy). Either way, Double Dragon Neon is a game that’s worth putting on your radar if you’ve never played it.

What can I possibly say about Halo that you don’t already know? It’s a massive franchise that ushered in an era on multiplayer first person shooters on consoles.

Game Pass has the Master Chief Collection which includes Halo 1-4, ODST, and Reach. It’s a massive amount of content. However, if you’re purely looking for a more old-school experience, you can toggle the graphics on Halo CE and Halo 2 back and forth to look like the original Xbox versions instantly with the single press of a button.

You can find more info on the Master Chief Collection here.

Myst is a game that I’ve heard mentioned for years, but I never checked out until I was putting this list together. As someone who doesn’t have any experience with the original version, this updated version seems like a great place to jump in.

It not only allows people who’ve previously experienced to enjoy random solutions to the puzzles, but it also offers a “Classic” option which includes the original solutions. If you like the original or you’ve ever been curious about Myst, check out the updated version on Game Pass!

NHL ’94 is a classic hockey game and it seems that even a company as large as EA saw the potential in releasing an updated version of the game. It’s here as part of Game Pass Ultimate (which includes EA Play) and should scratch the itch for anyone who’s looking for the old-school experience on a modern console.

Quake is another one of those old-school shooters like DOOM which still seems to hold up really well. The recently released remaster also feels like a great way to experience Quake for the first time if you’ve never had the pleasure.

It’s fast-paced and crazy and if you’re looking to scratch the itch for an old-school FPS, I don’t think you’ll be disappointed here.

Rare Replay feels like the ultimate retro game collection on Game Pass. Not only does it have the 360 ports of the bigger N64 titles like Banjo-Kazooie, Perfect Dark, and Conker’s Bad Fur Day, but it also has plenty of games for the non-N64 crowd as well. These include classics like Killer Instinct Gold, R.C. Pro-Am 1 & 2, Battletoads, Battletoads Arcade, Cobra Triangle, and several others as well.

Rare has a deep history, and Rare Replay is one of the best ways you can experience a lot of these games.

Streets of Rage 4 is one of the best beat ’em ups I’ve ever played. Not only does look and feel great, but it also supports up to 4 players locally and does the series justice in a way that does fans proud.

If you like beat ’em ups, please do yourself a favor and play this one if you haven’t had the pleasure yet.

Windjammers is another name that I’ve heard thrown around for awhile, but I’ve never had the pleasure of checking it out until recently.

It’s essentially a souped of version of Pong at its core and it’s a ton of fun. This definitely strikes me as a game that would be an absolute blast to play with friends who enjoy arcade sports.

You’re throwing a disc off walls and attempting to get it into your opponent’s goal. The game offers interesting mechanics like adjusting the speed of your throw, special moves, and some other interesting stuff that makes the gameplay a lot deeper than it might seem.

If you’re looking for old-school gaming, Game Pass is a fantastic service that definitely gets the stamp of approval. If you have an Xbox One or Series X/S and you don’t have Game Pass, do yourself a favor and at least check it out. Microsoft typically has a great deal for new subscribers, so it’s definitely worth trying out at the very least through whatever insane deal they might have.

Of course, you can always buy codes through Amazon as well or most other major retailers!

I hope you found this list helpful and I hope you find a new old game to enjoy!

How to Get Your Retro Games to Play Like NEW

How to Find Out What Your Retro Games...

How to Get Your Retro Games to Play...