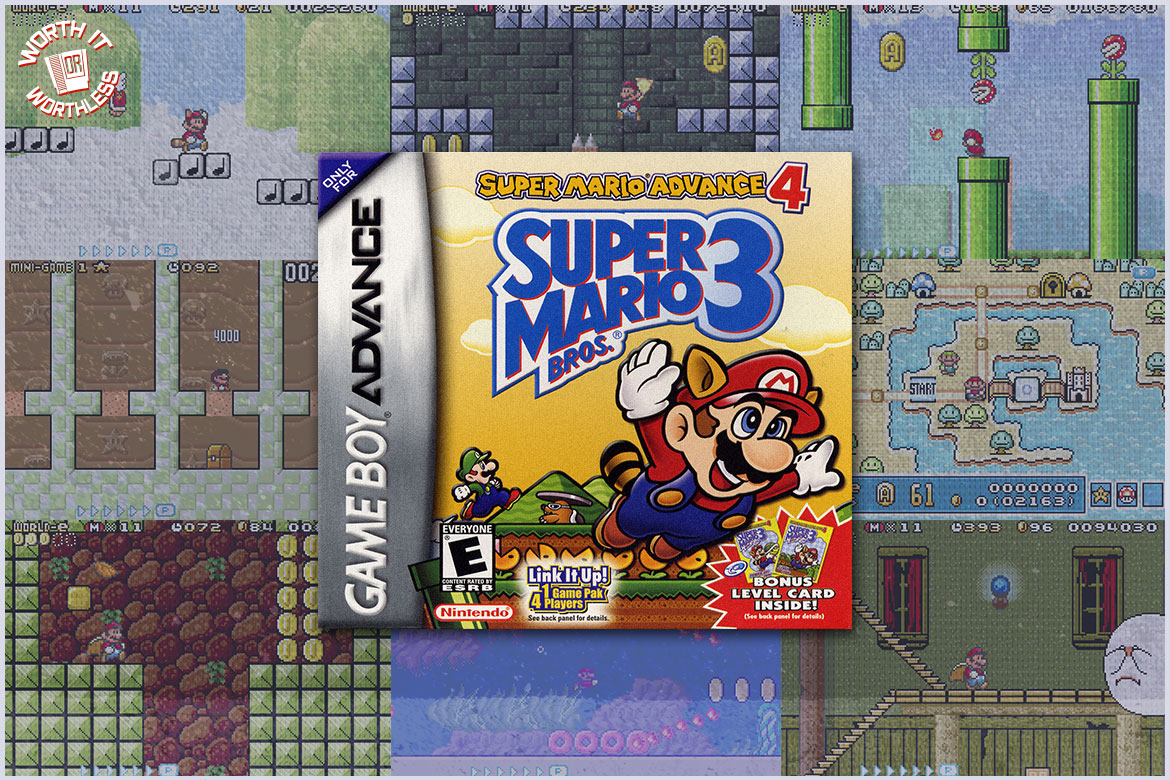 Nintendo often draws the ire of their fans when it seems like they just aren’t listening. However, sometimes they don’t get nearly enough credit for little things that they get utterly and completely RIGHT.

Back in the day, Nintendo released a little peripheral for the GBA called the e-Reader. If you’re not very familiar with it, they basically sold packs of cards that could be swiped through the device to unlock content for various games (or to play NES games).

Now, in the last 15+ years, I’ve never really heard anyone talk about these levels. Mario 3 is one of my favorite games of all-time, so extra content for it seems particularly interesting for me. I’m at a point now where anything that freshens up the experience is gonna grab my attention.

So, at some point on a recent episode of the Worth it or Worthless podcast, the e-Reader came up and it reminded me that I’d never taken the time to actually check out the extra levels that Nintendo released on the GBA, so I thought it was finally time to see what I’d been missing.

Turns out that I’d been missing quite a lot.

Ultimately, the e-Reader levels feel like they’re meant to be played after completing Mario 3. The difficulty on a lot of these levels definitely feels on-par with the most challenging Mario levels out there.

As someone who’s looking for well-designed, challenging, quality levels in Mario games, I absolutely love what Nintendo has added here. I like Mario Maker well enough, but a lot of the levels (most of the levels?) don’t quite have the magic of the levels that Nintendo designs themselves.

If you’re good at Mario, I really think you’ll find these levels interesting.

And of course, speaking of Mario Maker, these levels actually feel like Nintendo’s own version of Mario Maker in a few different aspects. Not only did Nintendo add a lot of challenges that you might not normally find in a typical Mario game (other than maybe the Special World in Super Mario World?) but they actually used the Super Mario Advance engine to bring in elements from Mario 2 and Super Mario World to mix and match the 3 different Mario games.

You might find yourself uprooting plants while wearing a cape, only to find a Raccoon Tail all in the same level. This really feels like a fun, novel experience and it’s something that I’m finding super enjoyable.

Coins Have a Purpose!

One of the things I was lamenting recently on the Mario 3 episode of our podcast was that Mario games needed a shop where you could spend the coins you collected. Opening chests in Mushroom Houses is all fine and well, but I’d much rather put my coins to good use and buy the items I actually want.

One of the nice things about these e-Reader levels is that you can actually put your coins to good use. For the low, low price of just 30 coins, you’re able to play mini games where you can earn extra items with the coins you’ve collected. A nice thing here is also that the mini games are actually fun. It’s a nice touch for when your stock of items starts running low.

There’s A LOT of content here. 38 total levels and 3 mini-game Mushroom Houses. 5 of the levels are simply remakes from Mario 1. The other 33 levels are totally new challenges that are made even more appealing by the “A” coins that’s can be collected in each level which adds a nice bit of challenge and completionism to the whole package.

There are also 8 additional e-coins which can be collected in 8 random levels that are displayed in a gallery in the castle on the e-reader world map.

Beyond that, the game also tracks which character you’ve beaten a level with. Both Mario and Luigi are selectable and play differently. This means it’ll take quite awhile to get things to 100% completion.

It feels truly amazing to have extra Mario content to enjoy. I definitely enjoy Mario Maker 2, but it doesn’t quite feel the same as these levels. I’d highly recommend checking out these levels through the eShop if you own a Wii U while you still can. However, you can also pick them up on eBay if you want to go the more expensive, old-school route. Either way, if you’re a huge Mario fan like me, I really think you’ll enjoy these levels.

Get These Games Before the Wii U eShopocalypse!

The Games We’ve Hated the Most