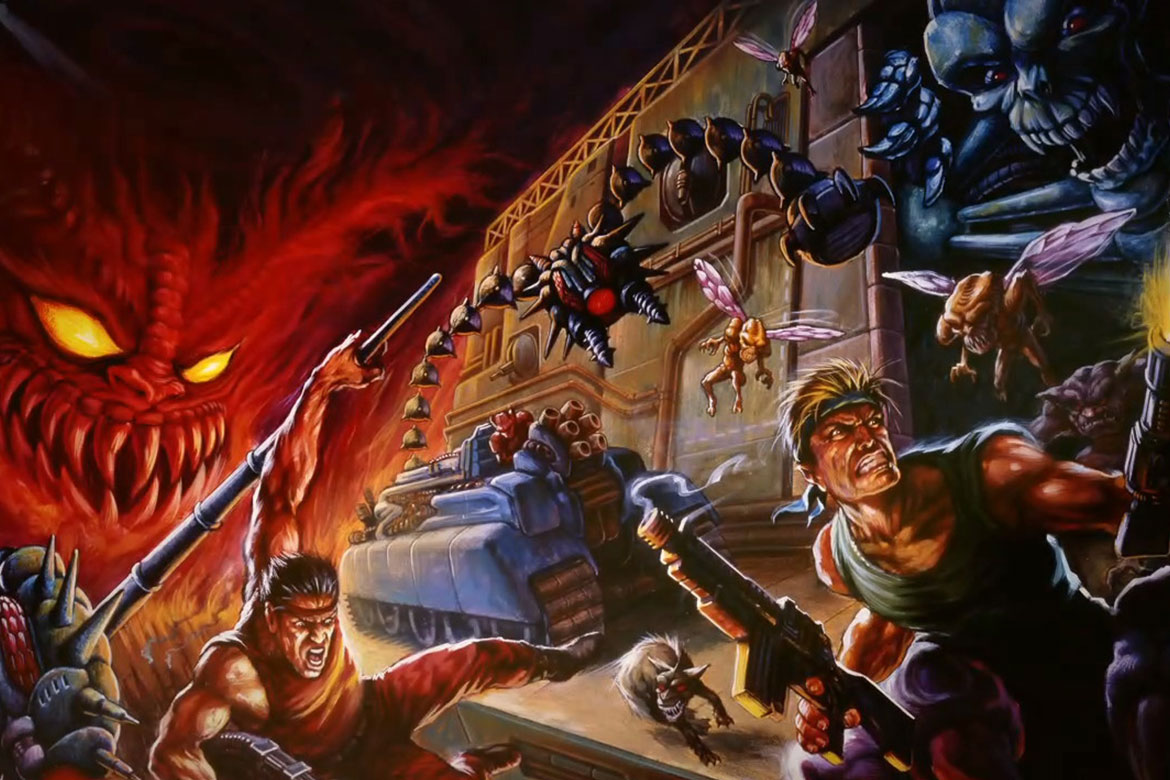 Contra is a classic franchise that seems to be familiar to pretty much anyone who’s ever enjoyed retro games. While Konami hasn’t garnered the best reputation from the online gaming community in recent years, they’ve actually been slowly but surely catering to retro gamers in a few different ways, which includes releasing their classic games on modern platforms.

So far, we’ve seen them give us a few Castlevania collections (Anniversary, Advance, and Requiem), some arcade releases, and of course, the forthcoming TMNT Cowabunga Collection.

Another collection we’ve seen (and the focus here) is the Contra Anniversary Collection. It was released a few years ago (available on Switch, PS4, Xbox, and PC) at this point and while I’ve enjoyed it for a few minutes here and there since adding it to my library of games on Switch, I haven’t taken the time to really dig in to EVERYTHING the collection offers until now.

The first thing that the Contra Anniversary Collection has going for it has a lot of games. Not only does it contain all the ESSENTIAL entries from the early years of the franchise, but it also has the alternate versions of the same games for anyone curious about the versions that came out in other territories.

The games the collection includes are:

For anyone who hasn’t spent a lot of time digging into the differences in the various regional versions of these games, there’s actually some important differences that make each of them have their merits. The Japanese versions of the original Contra and Contra: Hard Corps are better than the versions we got in North America (and are enjoyable for those that don’t speak Japanese as there’s not a ton of text to worry about).

The PAL versions are interesting as they allow gamers outside of that region to enjoy the games with different sprites and at 50hz (the original output rate) or an updated “Turbo” rate of 60hz.

As I said, the game selection covers all the essential Contra games, however, I can’t help but feel disappointed by the games that were left out of this collection as it feels to me like a missed opportunity to truly make the ultimate Contra release. We have Operation C on the Game Boy, but curiously they didn’t include the Game Boy release of Contra: The Alien Wars or the NES game Contra Force (despite mentioning it elsewhere in a bonus feature).

It just strikes me as extra unusual considering that they already had NES and Game Boy games running on this collection, so it’s definitely not a matter of running the emulation for different consoles. They also didn’t include NES version of the original Probotector, which is also a little bit strange considering the other Probotector games included here.

Overall, it just feels a bit like a lack of concern on the part of Konami for making this collection as good as possible (which we’ll talk about in other areas of the collection as well). It’s unfortunate that Konami didn’t go to the lengths to give us translated versions of the Japanese ROMS, but it doesn’t surprise me based on some of the other choices they’ve made with this collection.

While I definitely appreciate Konami making these games available on modern platforms, I can’t help but feel like the love and attention to detail that should have been put into a collection like this simply wasn’t there. Regardless of that fact, the game selection here is great, despite the handful missing titles/translations.

When it comes to the little things that make retro gaming more enjoyable these days for a lot of folks, the Contra Anniversary Collection seems to have missed the mark by just a little bit.

When it comes to saves, each game includes a single save state. While this is definitely better than nothing, the collection lacks a rewind feature. One save is fine for most folks, but for most people looking to maximize some nostalgic fun, I suspect a rewind feature helps offset the need to save over and over (it does for me at least).

This is even more bizarre since the collection has a “replay” feature built into it. You can literally save a video of your gameplay and create a quick save at any moment you want during a replay. I love that there’s a replay feature here, it just feels like they could have implemented the feature more directly into the gameplay since they’re already recording everything the player does.

So, I guess technically rewinding is in the collection, just not in the way that it should be…

Another “Huh?” moment I had with the Contra Anniversary Collection came when I dug into the options menu. A lot of retro game collections these days include a way in the options menu to toggle scan lines on and off as well as changing the aspect ratio independently. This collection opted to merge all the visual options (with the exception of the optional borders) into just 6 different options.

As someone who doesn’t like playing with scan lines, it’s just completely confusing that I can’t set the visuals exactly how I’d like, which ISN’T ABNORMAL in any way shape or form.

For all the things that the Contra Anniversary Collection overlooks, there are a few small details that I appreciate. These include the optional “Rapid Fire” mode that you can active with a shoulder button as well as the ability to select the difficulty in the arcade games included in the collection.

There’s also an interesting “Bonus Book” that’s included called The History of Contra. It’s a bit of a weird experience that mostly starts off with tidbits about each game in the collection as well as the controls and then moves onto interviews with some of the folks who were originally involved with Contra as well as some pretty interesting concept art.

The digital book is fun to flip through, but ultimately leaves me feeling a little bit more burned by the other small details that got overlooked other places in the collection. Regardless, if you’re interested in the history of Contra and you enjoy behind-the-scenes types of content about retro games, you should definitely look through the bonus book here as I think you’ll enjoy it.

If you look at a near-perfect collection like the Mega Man Legacy Collection, you’ll see that the Contra Anniversary Collection has the makings for a great collection, it just falls short on the little things, which is unfortunate for such an important franchise in retro gaming. With that being said, I actually STILL RECOMMEND the collection for anyone who wants a legit way to play some Contra without the hassle of picking up some rather expensive cartridges.

The Contra Anniversary Collection does the basics wells enough and if you wait for a deal, there’s plenty of value that you’ll find here. In fact, I’d go so far to say that even if you own the original cartridges of some/most of these games, you’ll still find that if you get this collection on sale, the alternate versions of the games alone are worth the price you’ll probably pay at this point.

I’d be hard-pressed to recommend picking up the Contra Anniversary Collection at the full-price of $19.99, but I’m still glad that it’s in my library.

If you enjoyed this review and you want to support Worth it or Worthless, buy a copy of something Contra on eBay and we’ll receive a small commission! Thanks for reading!