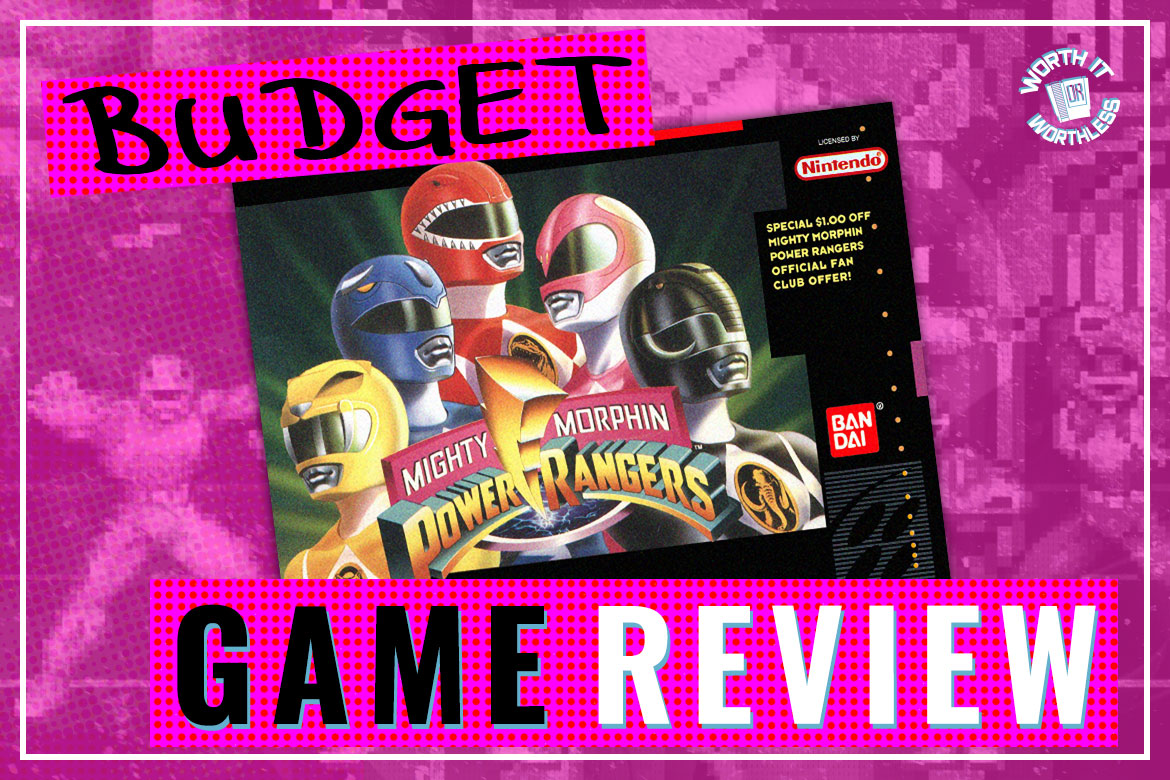 One of the biggest staples of the 90’s was Power Rangers. With the Power Rangers craze came several video games which, interestingly enough, tended to be pretty different from platform to platform even though the title of the games themselves remained unchanged.

Mighty Morphin Power Rangers on Genesis is a fighting game where the SNES version is (mostly) a side-scrolling action platformer. When it came the movie tie-ins, the various versions were also different.

The SNES version takes place over the course of 7 missions where you take your Power Ranger of choice through levels fighting different colored Putty Patrollers, navigating various platforming segments, fighting monsters, and ultimately climbing into the Megazord in the last couple levels and fighting giant monsters in a fighting game style scenario.

With the table set, let’s get into what the game did and didn’t do so well.

WHAT THE GAME DOES WELL

The first thing that Mighty Morphin Power Rangers has going for it are good, tight controls. A lot of games from this era can feel mushy, or slidey, or just outright like they don’t correspond well to the player’s input.

Fortunately, this game makes you feel like you’re in control of your character most of the time. Attacking, jumping, combos, and movement are all tight and responsive and it generally makes the game fun to play as a result.

The next thing that this game does pretty well is that it ditches the annoying, artificial difficulty increase that plague a lot of retro games in the form of limited continues.

You start the game with 2 lives. When you die, you go back to a checkpoint in the level, and when you lose all of your lives, you can continue from the current level as much as you’d like. To make this even better, you’re also given a password after each level, so you can pick up where you left off if you don’t want to play the game in one sitting.

Yellow and Blue and Red and Pink and Black

The next thing that makes the game interesting is that it lives up to the Power Ranger aspect of the franchise and allows you to choose from 1 of the 5 original Rangers. While they all mostly play similarly, they each have individual special moves when they morph. Even though it doesn’t make a lot of difference overall, it’s nice to see the option for different characters and animations throughout the game.

Another aspect here that the game brings in at the end is controlling the Megazord in a couple of fights. It’s a bit strange that the game doesn’t simply put Megazord levels in between missions where you fight the boss from the previous level in grown to a massive scale like the show, but I’m glad that they at least found a place for the Megazord in the game as it’s an essential part of the show.

The last thing that I really liked about my experience with Mighty Morphin Power Rangers was that the game was actually beatable. This is remarkable since it’s not exactly the most common thing when it comes to retro games. The generous continues and the length of the game make this an experience that’s still fun today, which is always welcome when it comes to retro games.

Overall, the difficulty isn’t too crazy, and it really serves the game as a whole. It’s not always easy, but it’s definitely manageable if you’re willing to retry levels 2-3 times.

WHAT THE GAME DOESN’T DO WELL

For all the things that the game does well, ultimately, there’ not a whole lot here. The game basically throws you right in without much in the way of a story and you simply go from “Area” to “Area” of the game without any explanation of what’s going on. After 5 levels as a Power Ranger on foot, you’re thrown into 2 random Megazord fights which seem to have no relation to the previous levels.

After rolling the credits, I feel kind of a sense of “that’s it?” I wasn’t left feeling much of a sense of accomplishment or with anything cool that I’d unlocked for beating the game. With the being said, a game that’s fun and bare bones is definitely preferred over a game that has plenty to offer but ultimately isn’t much fun to play.

While this game was largely a fun experience overall, the game couldn’t help but have a few moments where I found myself feeling a little bit frustrated.

At times, the AI can make the game feel a little bit cheap. I found myself just shy of the range where I could land a hit on an enemy, but they had no trouble punishing me for missing a hit by a few pixels. There’s also times in this game where you get swarmed by enemies and it’s just outright frustrating to get knocked around.

When controlling the Megazord, I definitely had moments of frustration from the AI blocking too much and just feeling like the difficulty spiked just enough to get on my nerves. After a few tries, I beat the fights, but it was one of those moments where I was pretty much ready to be done with the game, but the AI got the better of me and forced me to retry. It just felt bad.

No, No Power Ranger

The last thing about the game that I wasn’t so fond of was a sense that the game didn’t do a great job as a “Power Ranger simulator”.

This might be dumb, but as a childhood fan of the series, there’s a couple of things that irked me. This game not only lacks the Green Ranger as a playable character (he’s playable in the Genesis version), but as I previously stated, it doesn’t let you fight the bosses in a similar way as the show.

In this game, you reach the end of a level and fight a monster. Once you defeat said monster, you simply move on to the next level. This game would have benefited from allowing you to play as the Megazord in between every level and to fight each boss in their Godzilla-sized form like the show.

Generally speaking, if you’re not a fan of Power Rangers, you probably won’t notice or care about these little inconsistencies. However if you’re a fan of the series, it might diminish the experience a bit.

WORTH IT OR WORTHLESS?

As of the time that I’m writing this, PriceCharting has this game listed around $21. The game will likely take you around an hour, and there isn’t much incentive to go back through the game.

So, for an hour of fun around $21, I ultimately have to call the game worthless. That being said, it’s definitely not a terrible experience and might be worth picking up if you found a cheaper copy of it somewhere closer to the $10-$12 range.

If you’re a massive Power Rangers fan overall, you still might want to add this one to your collection, but I can’t say you’re missing much if you pass on this one.

Is Mario Strikers Charged Worth Playing Before Battle...