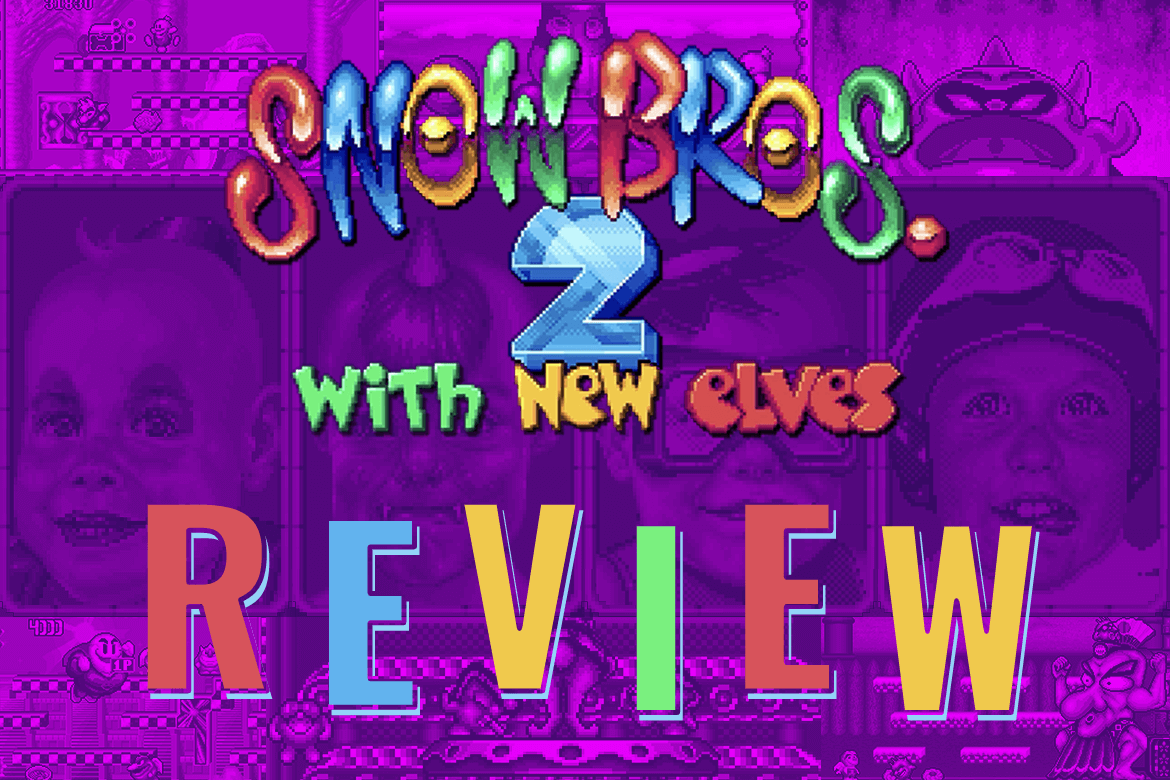 Honestly, if you would have told me 3 short months ago that I’d have something nice to say about anything related to Snow Bros., I wouldn’t have believed you.

The original game and its NES port feel like clunky versions of Bubble Bobble. Other than being an obnoxiously expensive game to add to your NES or Mega Drive collection, they’re not worth writing home about.

If you’re unfamiliar with Snow Bros., it’s essentially an arcade game where you’re throwing globs of snow at enemies to turn them into a giant snowball and then kicking the snowballed enemy into as many other enemies as possible. When you clear all the enemies out of each single-screen stage, you move onto the next one. You also fight bosses every so often as well.

It’s a standard issue, basic arcade formula. However, Snow Bros. 1 didn’t execute on that formula particularly well, which is probably why I’m genuinely surprised that the second one is actually enjoyable.

I’m not sure how either a sequel OR home ports of the original Snow Bros. got the green light. Based on my experience with both the arcade version and the NES version, I can’t imagine it was highly successful in the arcades. That being said, I’m glad a sequel exists.

Snow Bros. 2: With New Elves is by no means a perfect game, but if you own an iiRcade, it’s one that’s worth adding to your library regardless.

Let’s talk about why.

WHAT THE GAME DOES WELL

The first that that makes this game stand out as something that’s worth your time is the fact that it actually feels great to play. The player moves around at a quick pace and it feels good to be able to drop through floors (a feature missing in the original Snow Bros). Something I really like about this game is I feel like I’ve got responsive control over my character at pretty much all times, which is an essential feature of a game where chasing high scores is the main point.

At the end of the day, I’ve found myself chasing down high scores in Snow Bros. 2. Each level has a static, predictable layouts and enemy placements. Early levels are easy to optimize for points, but things are much trickier as the game progresses, which is where the game is starting to become interesting for me.

I feel like each time I play through a level after World 3, I feel a little overwhelmed with trying to survive the level rather than trying to optimize for killing as many enemies as possible with a single snowball. This makes chasing down a high score interesting as it starts to really feel like it takes some skill to continue maximizing score.

The next thing that makes Snow Bros. 2 stand out against something similar like Bubble Bobble is that it changes up the formula in a couple of the worlds. The game consists of 6 worlds, but 2 of those worlds are actually vertical-scrolling platforming levels.

This provides a different kind of challenge that rewards players for speed, rather than trying to optimize a line of enemies to take out. The faster that you get to the top of one of the these levels, the more bonus points you’ll be rewarded with to the tune of several hundred-thousand points. If you’re ultimately chasing high scores in Snow Bros. 2, this is where the magic is at as the bonus point rewards are ASTRONOMICAL compared to the rest of the game.

One of the things that makes Snow Bros. 2 a lot of fun is getting upgrades for your characters. The upgrade system comes mainly in the form of 3 different beverages which give you a one-time upgrade until you die. The things that can be upgraded are your speed, range, and power. After you have an upgrade, the same drink will give you an extra 5,000 points instead of an upgrade.

Occasionally, you can also pick up a trophy that allows your character to grow massive and float around the screen for a few seconds wiping out everything that you touch, which is another fun little touch that enhances the overall experience of the game.

Another interesting feature of the game is the occasional hidden treasure chests that are strewn throughout various levels. These contain things like upgrades and the letters that you can collect to get extra lives.

These aren’t a significant part of the experience, but they’re a small detail that helps to enhance the game and add a bit more incentive to move around the levels and explore each corner of a given maps.

While I’ve only played Snow Bros. 2 in single player, it does support 2 players on the iiRcade version and up to 4 players in the original version. Arcade games are almost always more fun with friends, so I’m glad to have the option here.

One of the things that’s really great about Snow Bros. 2 is that it doesn’t overstay its welcome. The game can be beaten in around 30 minutes, which really helps with the experience of chasing a high score.

The shorter length makes the game not only feel feasible to finish, but also serves the chase for a high score. I feel like every time I play the game now, I’m able to digest the levels a bit more and I can slowly see ways to improve my high score more and more. This would be a lot more intimidating if the game were significantly longer.

I think the last thing that really draws me in with Snow Bros. 2 is the fact that the game is highly predictable. One of the things I’m finding more and more enjoyment in over the last year or so is attempting to beat games without dying.

While I know this isn’t necessarily most people’s idea of fun, the fact that this game is predictable enough to make a “1 Credit Clear” seem approachable for me makes me want to keep playing it. At the end of the day, the game isn’t brutally hard, which I think serves the fun factor a lot.

WHAT THE GAME DOESN’T WELL

Forget That Fun You’ve Been Having

At this point in my Snow Bros. 2 career, there’s 2 bosses that I’m struggling to find the fun with. There’s a rabbit boss and an iguana boss that just seem to get on my nerves every time I play them. The other bosses in the game feel predictable and manageable, but my angriest moments have to be from these 2 boss fights.

Other than a couple of annoying boss fights, there’s also some classic arcade GOTCHA’s that are designed to extract more money from the player. While playing the game over time will definitely smooth out the difficulty of these things, they’re still pretty jarring interruptions to an otherwise fun experience.

One of the worst things I can say about Snow Bros. 2 is that it has some of the weirdest, most terrifying sprites I’ve ever seen. The bosses are bizarre looking, and the character select screen is outright HIDEOUS. I’m not sure what the developers were thinking when they tried to make the New Elves human-looking.

The sprites in this game definitely bring down an otherwise fun experience.

What the game does well

What the game doesn’t so well

Worth it or Worthless?

Snow Bros. 2 absolutely caught me off guard when I bought it for my iiRcade. The original is basically a garbage version of Bubble Bobble and I was expecting more of the same from the sequel. In reality, I ended up tripping into a game that has the potential to become one of my favorite arcade games of all-time.

If you have the chance to check out Snow Bros. 2: With New Elves, I’d highly recommend giving it a shot. If you happen have an iiRcade and chasing high scores is your thing, I’d say it’s WORTH IT at the full price of $9.99.

Interested in digging a bit deeper? iiRcade’s game store (non-affiliate link) has you covered with some footage and game info.

Bubble Bobble Neo! – A GREAT Way to Play a CLASSIC